I was in Midland, Texas, months back picking up a group. It was the wife’s birthday, so she and her hubby gathered some friends and took a G650 to Cabo for the weekend.

As crew members, we are recommended to “elevate” a trip. We have full reign to offering bespoke service.

This is how I ended up in a huge discussion with the captain. He is a born and raised Texan and said, “These folks are from Midland. They want a Publix yellow cake with vanilla crème frosting. That’s all.”

Midland Texas or not, they can get Publix vanilla cake and crème icing any time they want. They’re on a $60 million jet, going to Mexico--maybe they could be open to trying something they weren’t used to?

I sat for a while thinking, while the captain followed me in the supermarket, complaining.

“They’re American; none of this fancy, exotic crap. Give them a white cake with vanilla crème icing.”

Why did he think his “big voice,” and burly is 6’2”, 280lb self was supposed to make me second-guess myself?

If you’ve ever heard me really laugh…

I sent him down an aisle for mango juice.

“We’re learning Spanish too while we’re at it,” I said.

“Godammit! What the hell are you making?”

I told him to put on his Caribbean, exotic hat, and come on the journey.

He had to go search for fresh mangoes, condensed milk, evaporated milk, etc…

He shook his head and said we should get the cake just in case. I bought a silicone mold for the dessert. We have a fridge and freezer on board, so I prepared the dessert during our one hour pre-flight.

Upon boarding: A mango Bellini welcome drink. This consists of mango juice and champagne instead of a typical Bellini made with pureed peaches and champagne.

This group, in their 60’s, had no idea what a Bellini was, but they all tried it.

When it came time to present her birthday dessert…

“I have a Caribbean style Pannacotta, which is similar to Puerto Rican Tembleque, and also Haitian Blanc manger. It has a custard-like texture and it’s made with coconut milk, evaporated milk, and condensed milk. I'm serving it with strawberries and red currants macerated in ginger liquor, along with chocolate sauce sprinkled with cinnamon and cocoa.” 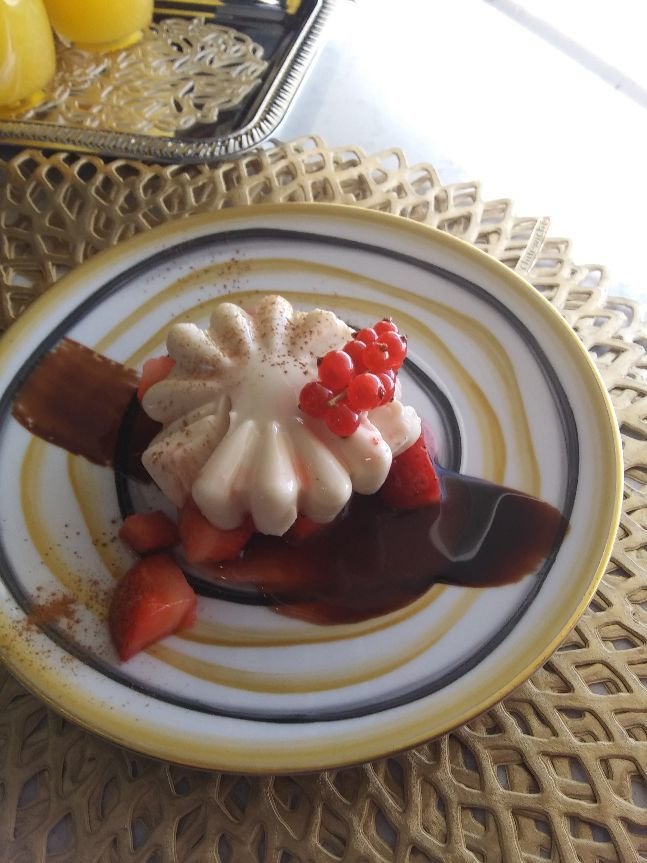 I made a modified (non-alcoholic) version for the pilots. One pilot never had mango before. He took a picture of the dessert and ate ALL of it.

The other one said, “Hell no! Birthday dessert should be vanilla cake with vanilla crème frosting.”

Whew, are you that person? Are you so used to what you know that any variation, deviation, or new ingredient sends you in a tailspin?

Did you know that kiwi could be substituted for strawberries in a recipe?

Do you ever catch yourself judging or rejecting the unfamiliar?

If you think back to Columbus days, these explorers traded spices and foods whose styles mutated with the availability of other ingredients and palate of that country. This means there are plenty of versions of that one thing you swear you "will never eat or try again."

My daughter doesn't like the texture of mushrooms. Unbeknownst to her, one day I created vegetarian sloppy joes by running the mushrooms through a food processor and continued with the recipe. She ate two sandwiches…

I’ve been around people who go on total diatribes because water can’t just be “cold,” it needs to be semi-frozen and the right brand, to be considered for consumption.

Once I said I used condensed milk in a recipe and the other person, disgusted, scrunched their face and said, “No! Gross! I just use a lot of sugar and milk…”

I had to buy bread rolls for a BBQ. The person said the sausages HAD to be on hoagie rolls, not hot dog buns.

My dad was that guy who demanded the same thing be served every day. I found it unnecessarily stupid, picky, and stubborn. I found myself never feeling hungry or wanting to sit at the dining table in his company--ever.

I've had guests staying at my house reproach me for making something new for breakfast everyday and having a variety of yogurts. "Breakfast should be oatmeal, and only strawberry yogurt."

I question preferences. I used to only like creamy peanut butter, because that's all I knew; until one day I decided to try crunchy. Yay!  I love 'em both.

What makes us try revising our preferences?

We get set in our ways, but are we missing out on some glorious experiences? I find people aren't even curious.

I stopped eating beef tongue because we had a maid who plated it wholly. It's a horrible visual. Last year at a neat Mexican food truck in Van Nuys, they cut it in small cubes and put it in a street taco. What a difference. I had two.

I have an even more horrifying goat story. Goat is tougher for me because it's game-y. The smell is off putting and I have yet to meet someone who can prepare it well.

There’s this corn porridge in Haiti my brother and I stopped eating because we associated it with my grandfather’s death. We were young. It was the thing he ate before he went downtown and had a heart attack. I’ve since released that block and have tried it. I don’t like the taste of it. Would I be open to trying it again, maybe someone else’s recipe? Sure.

I've eaten iguana in Ghana, and turtle eggs in Nicaragua. I RARELY ask what something is before trying it.

What creates mental blocks towards unfamiliar foods? Is it fear and/or lack of exposure?

I struggle with picky, stubborn eaters.

A lot of us make one experience THE experience--it's the crutch forever!

Maybe you got sick that time you tried X,Y,Z.

And? So what? Now what? How many years has it been?

That one pilot who had never tried mango before ended up in Kingston with me. I had him try Jamaican patty with coco bread, sorrel, and a sweet potato dessert. We then spent the day at the Rum Festival. :)

On that note, I’m glad you are here and open to trying something a little different.