ARE YOU THE TYPE TO TRY CAMEL MILK OR...?

How about traipsing the dingy corridors of Old Dubai in search of spices?

How about throwing on a robe with a hood like Handmaid’s Tale to visit a mosque?

Camel milk is different. However, it’s as different as goat’s milk is to cow’s milk. You can taste the difference, but it’s an acquired taste.

Camel milk chocolate is fantastic. The dates were always fresh.

I spent ten days in Dubai and Abu Dhabi. I had heard so many stories about it, so it was exciting to go on that work trip.

One of the most fascinating things I experienced was watching the sunset as we left New York, then rise as we flew over the United Kingdom, and set again as we landed in Dubai.  That was amazing and powerful, especially seeing it from the cockpit window. We were on a G650 and it took 12.5 hours (New York nonstop to Dubai).

Anyway, the over the top decadence was true. I thought it was like Vegas on steroids. 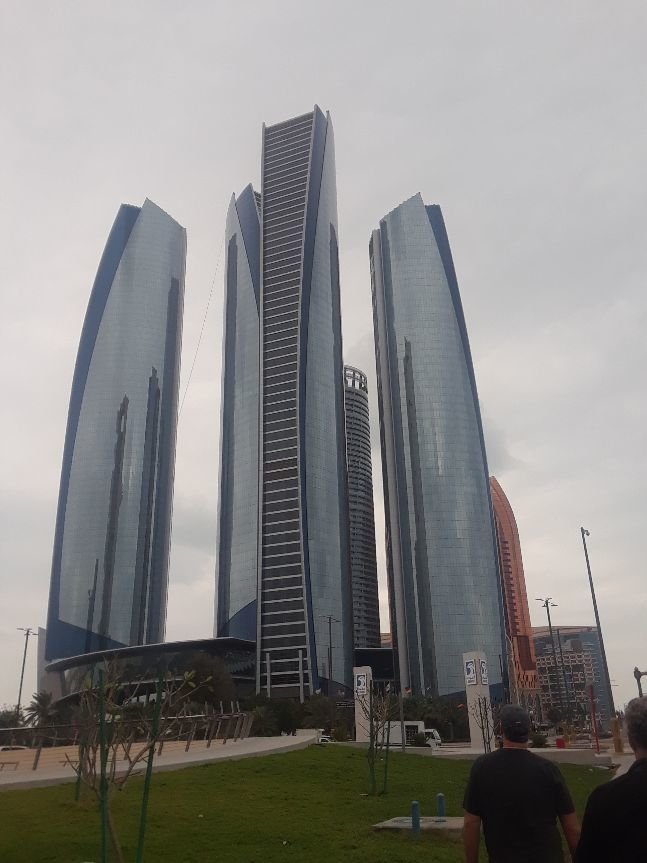 Here’s the thing, they have the world’s biggest malls, etc. But, I wasn’t interested in that. I went to a few smaller malls; do you know what I found?

Really? Surely I didn’t fly halfway around the world to see the same stores?

So, are you the type to try camel milk and venture, or stick with what you know?

I was interested in the souks. I heard there were spice souks and gold souks. If I’m in a new place, I would be doing myself a disservice by not experiencing the culture, food, local beer, etc. Anyone with me?

We were on the beach in a fancier area, so yep, I took an Uber (can you imagine my surprise?) by myself and went half an hour to Old Dubai, a gritty, rundown area reminiscent of Canal Street, East Village, or Chinatown area, New York, circa the 1990s, replete with narrow corridors. 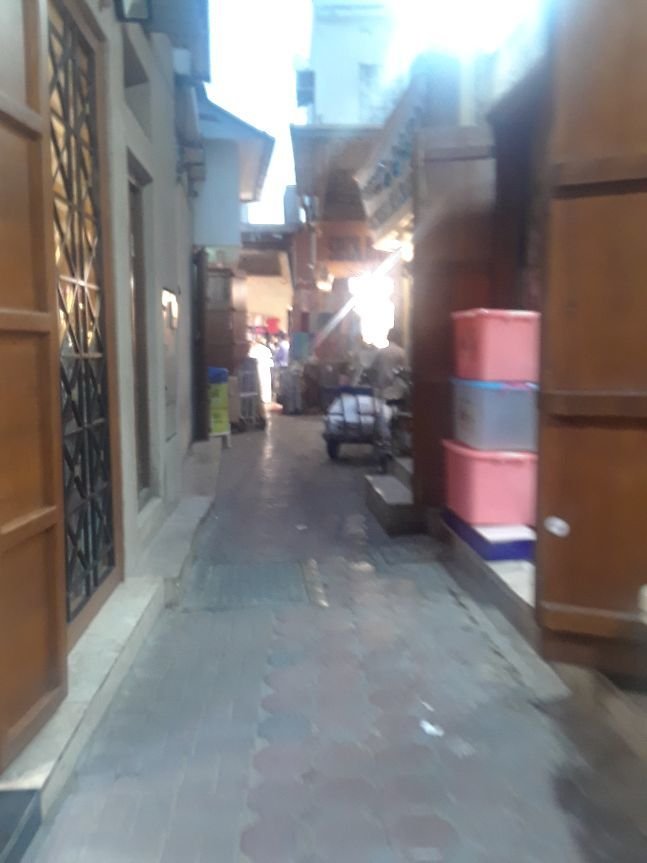 The spice souk was impressive! Small storefronts were lined with bins of vivid spices and flowers. The best things I bought were turmeric, dates, lavendar, camphor (bin closest to bottom of the pic, with white chunks of camphor), and handwoven items. 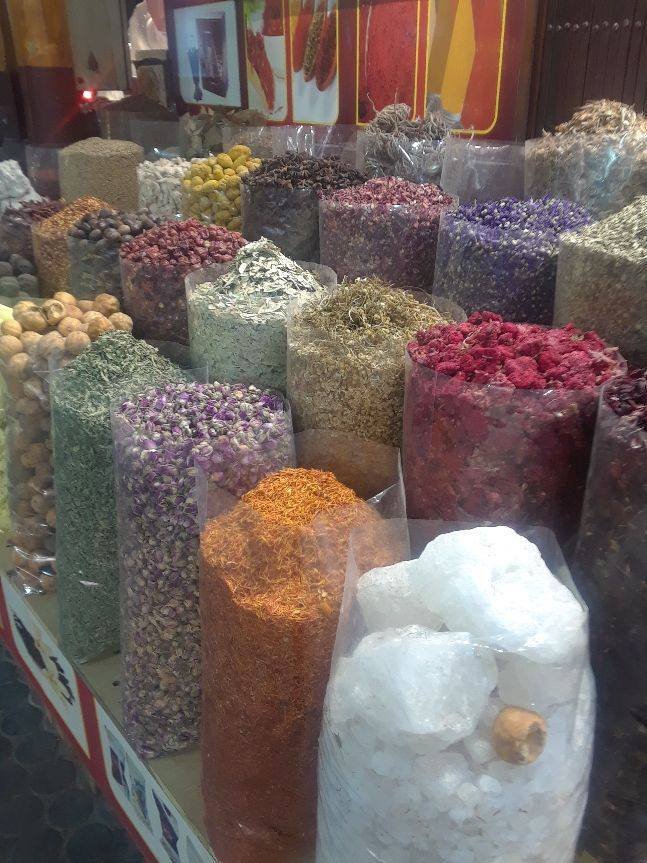 Gold. That was the other rave, right? If you’ve ever seen Bollywood movies, the gold is that bright—24k. It was gaudy, garish in style, and not my thing at all. They did have silver, classic, delicate, understated pieces.

By the way, as a woman, you are super safe. The laws are so stringent there; they aren’t messing with tourists like that. Did I see tourists in tiny shorts and tank tops jogging the streets? Why yes, yes I did.  I do think we should respect the laws/customs of other countries, so whereas I did go to the beach, but I wore a cover up to get there.

That day I had a long dress on, but an exposed shoulder, and my hair out. The men were extremely helpful and touchier than I expected. I had a few come to put their arms around me and propose marriage.

Aww so sweet, but no thank you. Appreciate it, though.

In Abu Dhabi, the Sheikh Zayed Mosque was impressive. 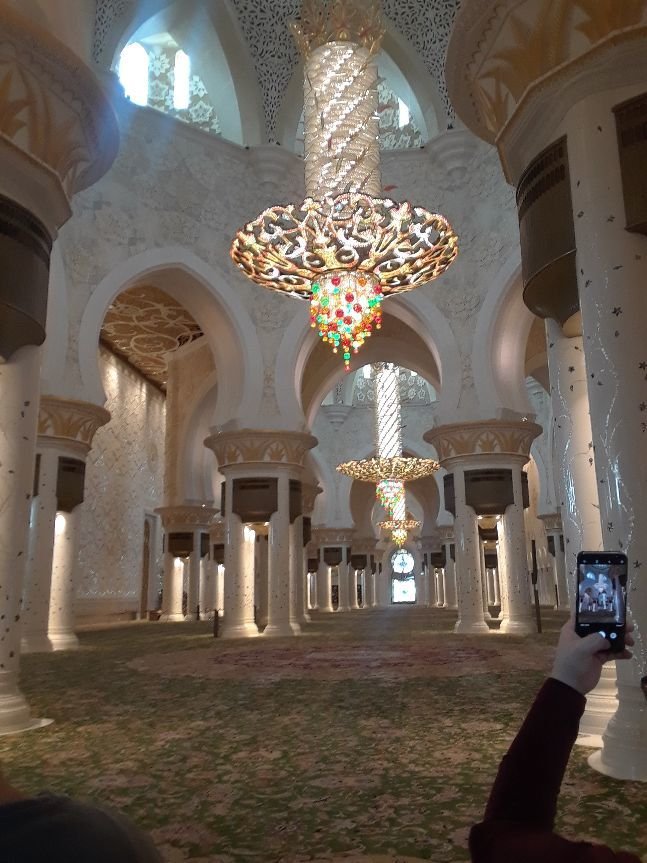 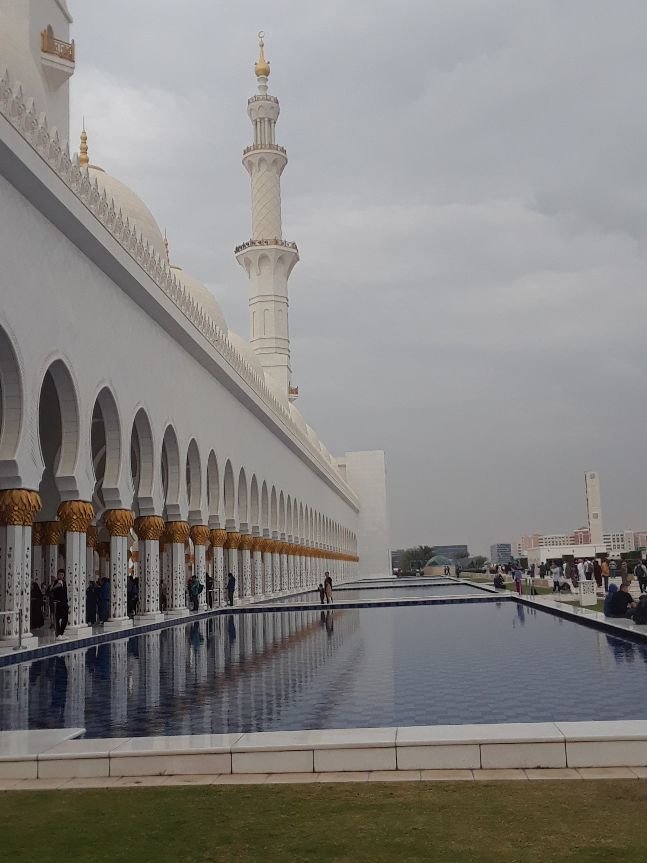 Yes, you will be whisked into a room the size of a large bedroom with racks of “robes,” before you get close to the mosque. One size fits all, Handmaid’s Tale, hooded, red, or blue robes, because of “decency." 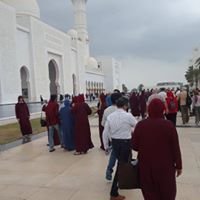 Four things that blew my mind:

I did muster the courage to ask the Uber driver about the women wearing the abaya and face veil (you are not allowed to address the women there). Some of the women had a modern style that looked like a metal T-square across their faces.

Anyway, he said, “It is their personal choice.”

My first reaction was, “Pfff, of course, you would say that.”

A few weeks later, I read an article about a woman who was full-on about her hijab. She felt that strongly about her religious convictions and this was her way of living accordingly.

I realized that those who live like this, it’s because it’s how they grew up, it’s what they know—kinda like the young girls/women in the FLDS compounds.

Everyone is correct from their own perspective.

I’ll leave it there.

Dubai Abu Dhabi souk spices
What to you NEED for a Caribbean Holiday?
IMAGINE YOUR NEXT VACATION
YOU PROBABLY DIDN'T KNOW THIS ABOUT PRIVATE AIR TRAVEL
Comments